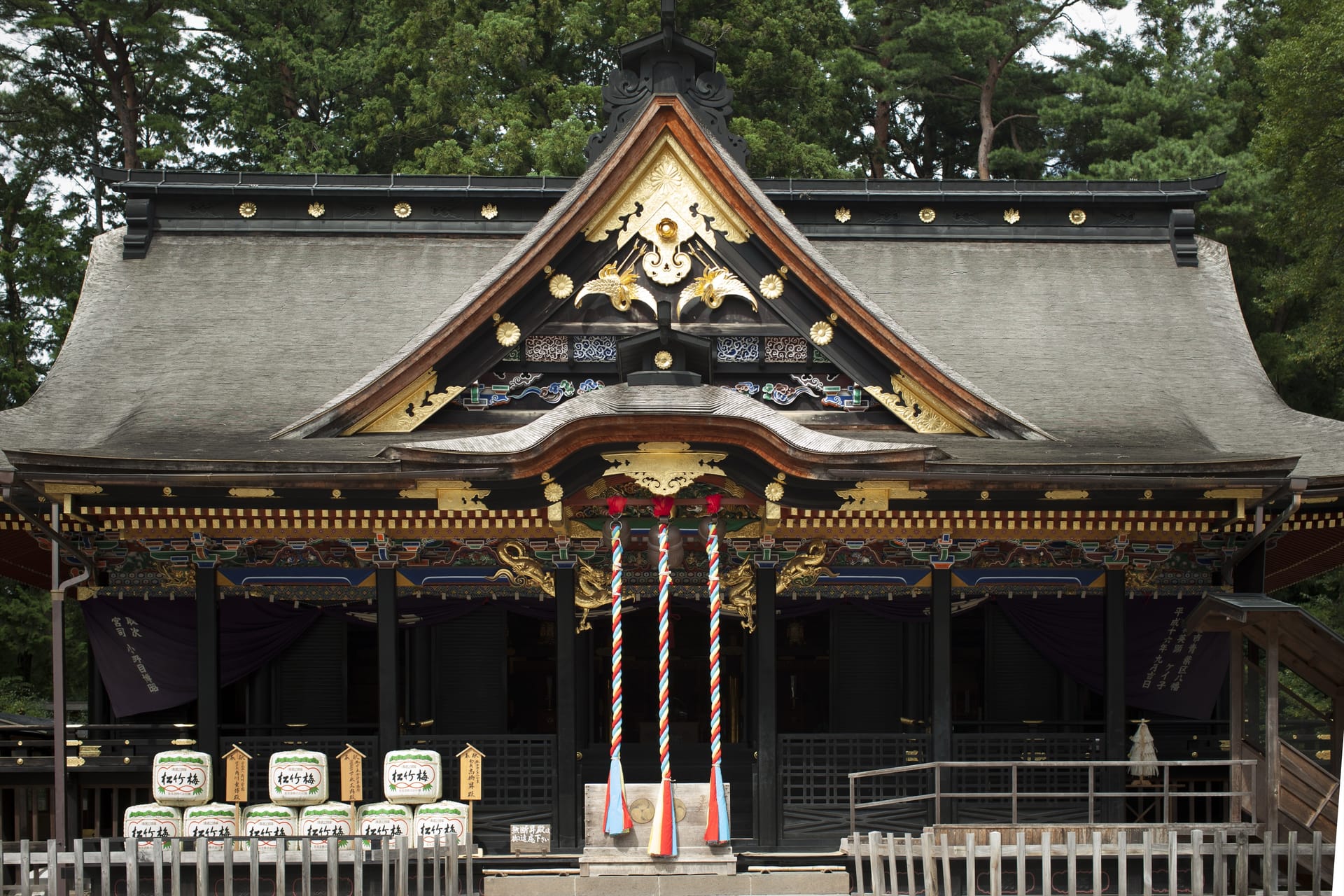 Hachimangu Shrine exemplifies the samurai aesthetic of the early Edo period (1603–1867) and was built as a grand statement of wealth, power, and cultural sophistication. The shrine was built on the orders of Lord Date Masamune (1567–1636) and enshrines the Date family’s patron deity, Hachiman, the Shinto kami of war. The finest craftsmen from around the country were commissioned for the construction, which lasted three years (1604–1607). The shrine’s main hall is a National Treasure.

A symbol of power and a work of art
The main hall is opulently decorated with gold leaf and beautifully painted carvings. The eaves of the hip-and-gable roof curve out from the central gable framing a pair of gilded cranes, symbols of longevity. The transoms are decorated with tigers, phoenixes, and other auspicious animals, as well as heavenly beings in flight. A pair of fierce gilded dragons appear to descend from the eaves above the entrance, poised with their talons bared. The shrine’s ornamentation is enhanced by its black-lacquered woodwork, which evokes Date Masamune’s black battle armor.

The approach
The approach to the shrine is up a steep flight of stone steps to a cobbled path flanked by trees. Visitors pass through three torii gates on their way to the main hall. The first and third are red, with large wooden plaques carved with the shorthand name of the shrine (Hachimangu). The first Chinese character (Hachi-) is composed of two simple strokes, which have been stylized to resemble a pair of doves, the divine messengers of the deity Hachiman.

The western entrance to Sendai
Osaki Hachimangu is located to the northwest of the city of Sendai, at the foot of a mountain pass that served as the main western entrance to the castle town. Court nobles and other important visitors from the Imperial court in Kyoto, as well as shogunate officials from Edo (present-day Tokyo), would have passed the shrine as they arrived in the town.

Date Masamune and Osaki Hachimangu Shrine
Date Masamune (1567–1636) was a legendary samurai warlord and an astute tactician. He helped Tokugawa Ieyasu (1543–1616) to win the Battle of Sekigahara in 1600, which put an end to centuries of near-constant civil war. After the victory, Ieyasu established the Tokugawa shogunate (1603–1867), the military government that presided over 250 years of peace and prosperity.

Masamune was rewarded for his service to Ieyasu with the valuable Sendai domain. He surveyed his new lands and determined the site to build a castle. He commissioned the construction of Osaki Hachimangu in the first few years of his rule, around the same time as he commissioned the construction of his seat of power, Aoba Castle. The shrine is a lasting reminder of Date Masamune’s legacy and Sendai’s heritage.