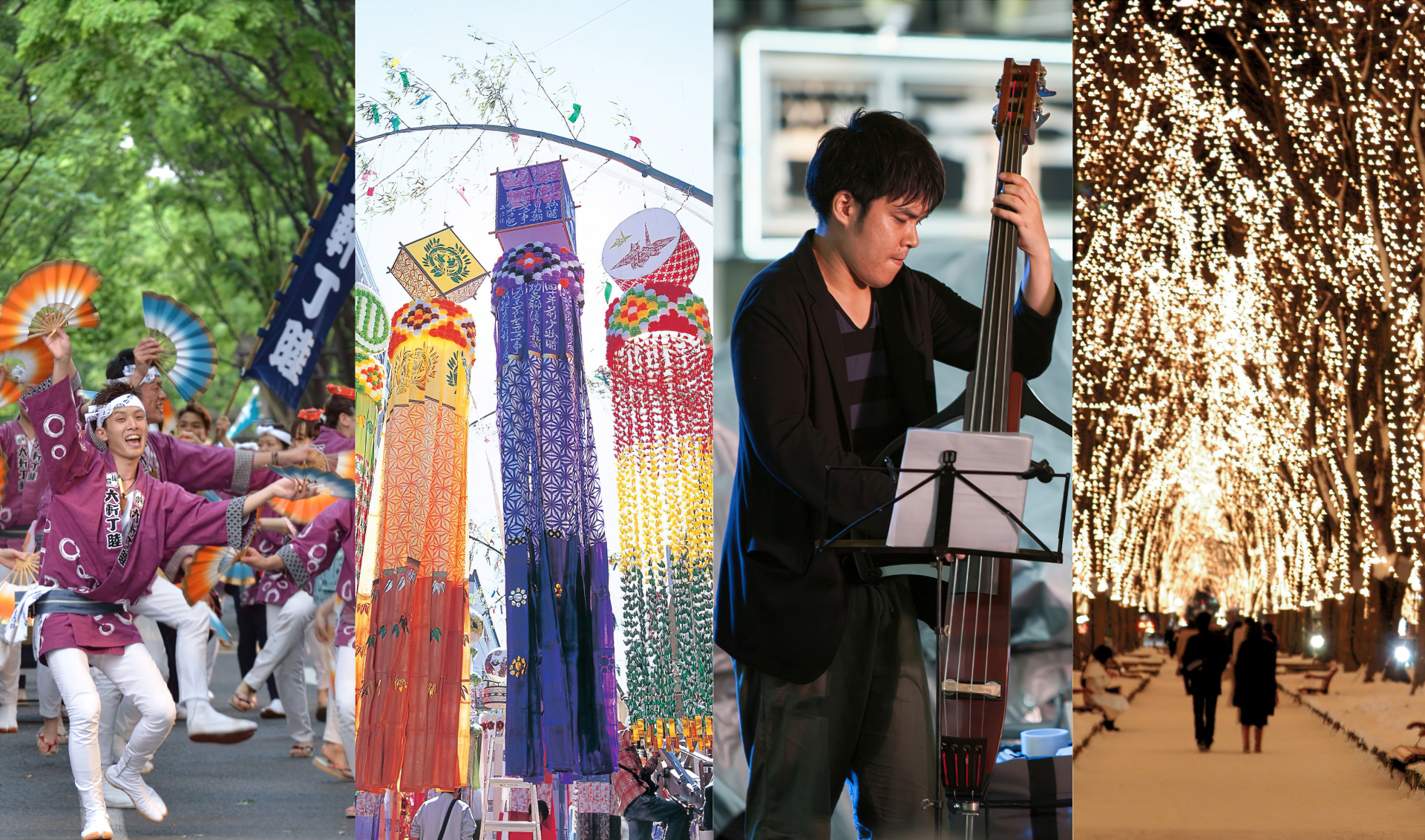 Ten thousand runners from all over Japan and the rest of the world run through the zelkova-lined avenues of Sendai. They run amidst the fresh, vivid greenery of springtime, cheered on by spectators from the sides of the road. Booths of local foods are another attraction. This is one of Japan’s most popular running events.
Where: Sendai city center (e.g. Jozenji-dori Avenue)
When: Early May

The festival is strongly associated with Lord DATE Masamune and represents the fresh green hues of spring. Highlights of the festival include the suzume odori (“sparrow dance”), so called because of the hopping style of dance which is performed to music. The festival is enhanced by a parade of valiant armor-clad samurai warriors and floats of magnificent splendor.
Where: Sendai city center (e.g. Jozenji-dori Avenue, Aoba-jinja Shrine)
When: Mid May

On the eve of the Sendai Tanabata Festival, a stunningly elaborate and beautiful display of 16,000 fireworks is held. The main streets of downtown Sendai become pedestrian-only zones. Put on your yukata (summer kimono) and join the fun.
Where: Sendai city center (Hirose-dori Avenue, Nishi Park, etc.)
When: August 5

During this special summer event, the city is decorated colorfully with more than 3,000 traditional tanabata (star festival) decorations. The brilliantly colored decorations, created from washi paper and bamboo, are both visually powerful and delicately beautiful. This is widely reputed to be the best tanabata festival in Japan.
Where: Sendai city center shopping arcades, etc.
When: August 6 to 8

Held on and around Jozenji-dori Avenue, the symbol and heart of Sendai, this is one of the world’s largest community-organized outdoor music festivals. The whole of downtown Sendai becomes a stage, as over 700 bands from Japan and across the globe gather to thrill people with a broad spectrum of sounds spanning jazz, pop, and rock.
Where: Sendai city center (e.g. Jozenji-dori Avenue)
When: Mid-September

This festival has its roots in a traditional festival of Kochi Prefecture in the western part of Japan. At this event, dancers perform to music in which one verse of a Tohoku folk song has been incorporated. Spectators will be entranced by the dancers who have added their own dynamic movements into their dance and are attired in unique costumes.

The zelkova trees that line Jozenji-dori Avenue are illuminated with some 600,000 lights to create a romantic winter spectacle. The “starlight wink” effect when the lights flicker off and on again is truly breathtaking.
Where: Jozenji-dori Avenue
When: Early December to December 31

January 2
New Year’s tradition of giving luxurious gifts to customers
This New Year’s sale is held on the first day of business after the New Year’s holiday where eager customers line up to purchase Fukubukuro (bags filled with various items whose value is more than the actual price) or receive lavish gifts from shops. Sendai is famous nationwide for the extravagance of the free gifts given out to customers.
Sendai Chamber of Commerce and Industry
https://sendaihatsuuri.com/eng.html

This traditional event is held at shrines where worshippers bring their New Year’s decorations to be burned on a large bonfire and pray for good health, good fortune, and the well-being of their families. The dontosai held at Osaki Hachimangu Shrine has more than 300 years of history under its belt, and is famous all over Japan for its hadakamairi (men dressed only in loincloths marching to the shrine.)
Where: Osaki Hachimangu Shrine
When: January 14